How to Pronounce “Wiktionary” 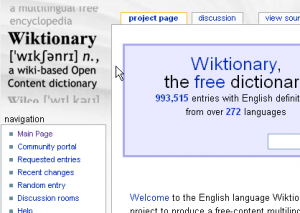 First, ask yourself how you would pronounce the word “Wiktionary”.  Ok, now proceed.

In April I commented in the Wiktionary wiki about…. well, I’ll let you read:

There is quite a  consensus  that the pronunciation for “Wiktionary” in the logo of this site is not definitive. Why then is this contentious pronunciation displayed on every page of the site? A look through the archives of the  discussion rooms,  FAQ  and  entry discussion  shows that the issue appears time after time without any resolution. This has caused me to lose faith in the process Wiktionary’s Administration uses to agree on subjects. Since I cannot trust Wiktionary, I will not be using Wiktionary. For the betterment of all, I hope this issue is resolved. I will check back in 6 months. —Gadlen  22:58, 8 April 2008 (UTC)

The responses were… well, less than compelling.

Apparently everyone is perfectly happy that the logo of this wordie website is an incorrect pronunciation of the name of the site.

Sure, encyclopedias are more exciting than dictionaries but it’s interesting to compare the popularity of the two sites…

For posterity, here is the rest of the discussion from above:

It is probably still the way it is for one of these reasons:
Sorry we wont be seeing you around, happy Fourth of July, Labor Day and…happy Halloween if you let it slip for a bit at the far end. –  TheDaveRoss23:08, 8 April 2008 (UTC)
It would only make our jobs easier if we decided our jobs didn’t include covering the newly-obsolete pronunciations. Personally, I do think we should try to include obsolete accents, where possible. (Also, call me a pessimist, but 6 months? More like 10—12.  ;-) –RuakhTALK  23:02, 9 April 2008 (UTC)

This made me laugh. Cheers. –Michael Z.

I KNOW that #2 above was directed at me. Now, I’ll go see if the pronunciation under discussion actually annoys me or not, although I’m certain that it will. You people did it just to piss me off. I’m going to have to double the thickness of tinfoil wrapped around my head, since someone (or something) is obviously penetrating the single layer I’ve been using.  HoggyDog  14:39, 9 April 2008 (UTC)

As usual TheDaveRoss has summed it up well. I asked on IRC if anyone was interested in running a new logo vote, but there seemed to be a general apathetic consensus that the current situation will do. If there is anyone else interested in running through the whole  !VOTE process again (assuming that the other Wiktionaries feel the same way – see  commons:Wiktionary  for a block of current logos which is why I assume they do) then we can start the ball rolling. I note that Wikibooks is rerunning their logo vote too – though their logo is in better shape than ours  ;). For interested parties, seemeta:Wiktionary/logo  for the last vote.  Conrad.Irwin  15:29, 9 April 2008 (UTC)

There is no  definitive  pronunciation for Wiktionary (and there never will be) because Wiktionary is a multi-national, multi-lingual project.  Pronunciation varies.  People in west London, the Bronx, Perth, Johannesburg, and Bombay will all pronounce the word differently. However, feel free to convince the entire world’s population to adopt and enforce a standardized pronunciation of the English language, as it would make our jobs much easier. I’m sure you can accomplish this in the 6 months you wanted for a resolution. —EncycloPetey  18:03, 9 April 2008 (UTC)